Black Dog is a gigantic canine about the same size as an adolescent calf.

Its paws are enormous and adorned with extremely long and sharp nails.

Considered to be the Devil’s dog, this mythical beast’s eyes are said to either be pitch black with death or glowing red with the fire from hell.

This big pooch’s mouth is constantly covered and filled with a dreadful smelling drool, virtually foaming as if it has rabies.

Seeing this black four-legged monster once was actually considered a sign of good luck, but seeing him a second time meant quite the opposite.

Though this evil beast is actually a ghost, able to arise from attacks unharmed – it can in turn undeniably instill severe injury onto its victims.

Axes and knives would simply pass right through its body, but a strike inflicted via ones of its claws would leave scorching burn marks on its victim’s skin.

All may be peaceful and serene, until this devil’s pet decides to pay you a sudden visit out of nowhere.

Random footsteps are heard from afar... you feel like you are being watched. You begin to be too afraid to look around too much, but give in to the urge. 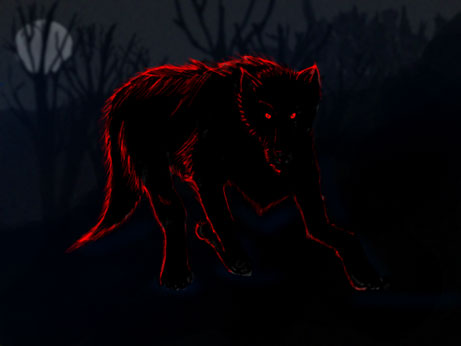 It's seems you may have been spotted, the evil canine ghost is picking pace towards you. Is it even possible to outrun this devilish looking dog? Perhaps if you run really fast and don't look back he will disappear.