This mythical beast was a famous giant and beautiful white bull in Greek Mythology. He was created and sent forth from the sea by Poseidon.

He was also said to be the father of the Minotaur, the lonely beast with the body of a man and the head and tail of a bull.

Poseidon had put a curse on Pasiphae, the daughter of Helios. She had been given in marriage to King Minos of Crete.

This curse caused her to lust for and mate with this white bull. Their unnatural union gave birth to the Minotaur.

The capture of this white bull was also the seventh labor of Heracles. The strongman was sent to Crete by Eurystheus to capture the bull.

The beast had been ravaging through the region of Crete by leveling the orchard walls and destroying all of the crops. King Minos gladly gave Heracles permission to take the bull away.

Heracles captured the bull by sneaking up behind it and strangling it. He then had the beast shipped back to Athens. Once the bull arrived in Athens, Eurytheus quickly wanted the white bull sacrificed to Hera.

She refused the sacrifice because its captor was the strongman Heracles whom she detested. The bull was then released to wander into the Marathon.

The Cretan Bull was eventually captured in Marathon by Theseus, the son of the king of Athens. He brought the white bull back to Athens where it was finally sacrificed.

Theseus and Mino’s daughter Ariadne then travelled to Crete where together they also killed the bull’s offspring, the Minotaur. 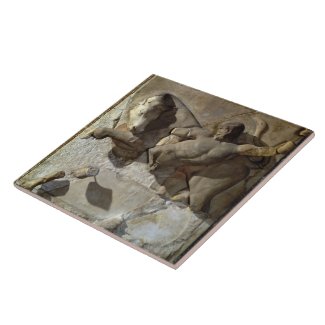 Hercules Fighting the Cretan Bull, one of a series Tile
by bridgemanimages

Watch this short iGamrGeekTV video featuring the creator of this famous bull, Poseidon himself.