Habitat:  All over the world


This interesting and popular mythical monster has been around and has been the subject of many stories for a very long time.

The practice of carving vegetables has been around for centuries whether turnips, squash, beets or gourds.  They are a great medium for simply carving artwork and can also be practically used as lanterns.

Pumpkin head carving became especially popular during the days leading up to and on Hallows’ eve.  Pumpkins still remain a big part of today’s Halloween celebrations.

No-one really knows the true and first story of how this pumpkin head evolved into what it has become today but many stories have since revolved around it.

Could it be that this vegetable head was used to protect us from evil spirits on “Hallows’ Eve” or did it represent the Christian souls in purgatory on “All Saints Day”?  That would explain the wild and ugly faces – purgatory is no fun.

If you carve then light up and sit one of these creepy lanterns on your window sill – will it keep harmful spirits away?  Could a Jack-o-Lantern also scare off unwelcome visitors, unknown travelers or even vampires?

In the United States, carving pumpkin heads was traditionally done as part of the festivities when celebrating harvest season.  Having these vegetables carved with wild ugly faces and flickering light within was just part of the decorations for this yearly party.

These monstrous vegetable heads do look quite creepy which is probably why they have made there way into many scary stories and tales.  There are even numerous artworks featuring the deadly and scary ‘Headless Horseman” that show him using one of these fiery pumpkins for a head.

One popular and old Irish folk tale from the mid 19th century titled “Stingy Jack” tells the story of a farmer that was able to trap the devil.  In one version he tricks the devil to climb up an apple tree and traps him there by carving a cross in the bark of the tree.

In another version he tricks the devil into taking the shape of a coin.  Once transformed into a silver coin, the devil jumps into Jacks wallet which was sitting next to a cross.  The cross strips the devil of his powers and Jack closes the wallet tightly, trapping the devil inside.

In both stories, Jack eventually lets the devil go after he gets him to promise him never to take his soul.  Unfortunately Jack had led a sinful life so when he died he was of course, not allowed into heaven.  Since he was also barred from hell Jack had nowhere to go.

Jack asked the devil how he could see his way while wandering in the dark and the devil threw him some embers from hell, embers that would never die out.  Jack carved a turnip, filled it with the everlasting embers and started wondering all corners of the earth in the search for a resting place.  He became known as "Jack of the Lanterns" or "Jack-o-Lantern".

Most will agree that pumpkin carving is great fun and nothing replaces the eerie feeling of seeing light flickering inside a scary carved out face in the dark, especially on Halloween night. 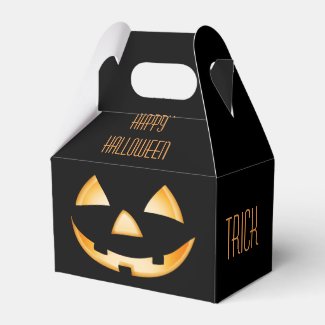 Return to top of Jack-o-Lantern page