Habitat:  All over Europe


This evil & frightening character is very much the polar opposite of another popular & positive fellow that many are very familiar with during Christmas festivities – good old St Nicholas.

While Santa represents the core essence of dreams & hope for children around the world, this dark being is the main ingredient of unthinkable evil & terrifying nightmares.

This Christmas time beast has been depicted in many variations with some particular characteristics proving to be more popular.  He is usually said to be very hairy, black or brown, having the horns of a goat and large cloven hooves.  He is also known for having a very long pointed tongue.

He has been described as carrying bundles of birch branches that he uses to hit children with.  Sometimes these are replaced with a large nasty whip.  He is also known to carry either a sack or basket for carrying children off to be eaten, drowned or taken straight to hell.

Just as St Nicolas is responsible for all of the well behaved children, this horned devil is devoted to all of the trouble making ones.  In Croatia, it is believed that St Nicholas gives good children presents and a golden branch to represent their good deeds.  If a child has misbehaved, the hairy horned devil takes the gifts and leaves only a silver branch to represent their bad deeds. 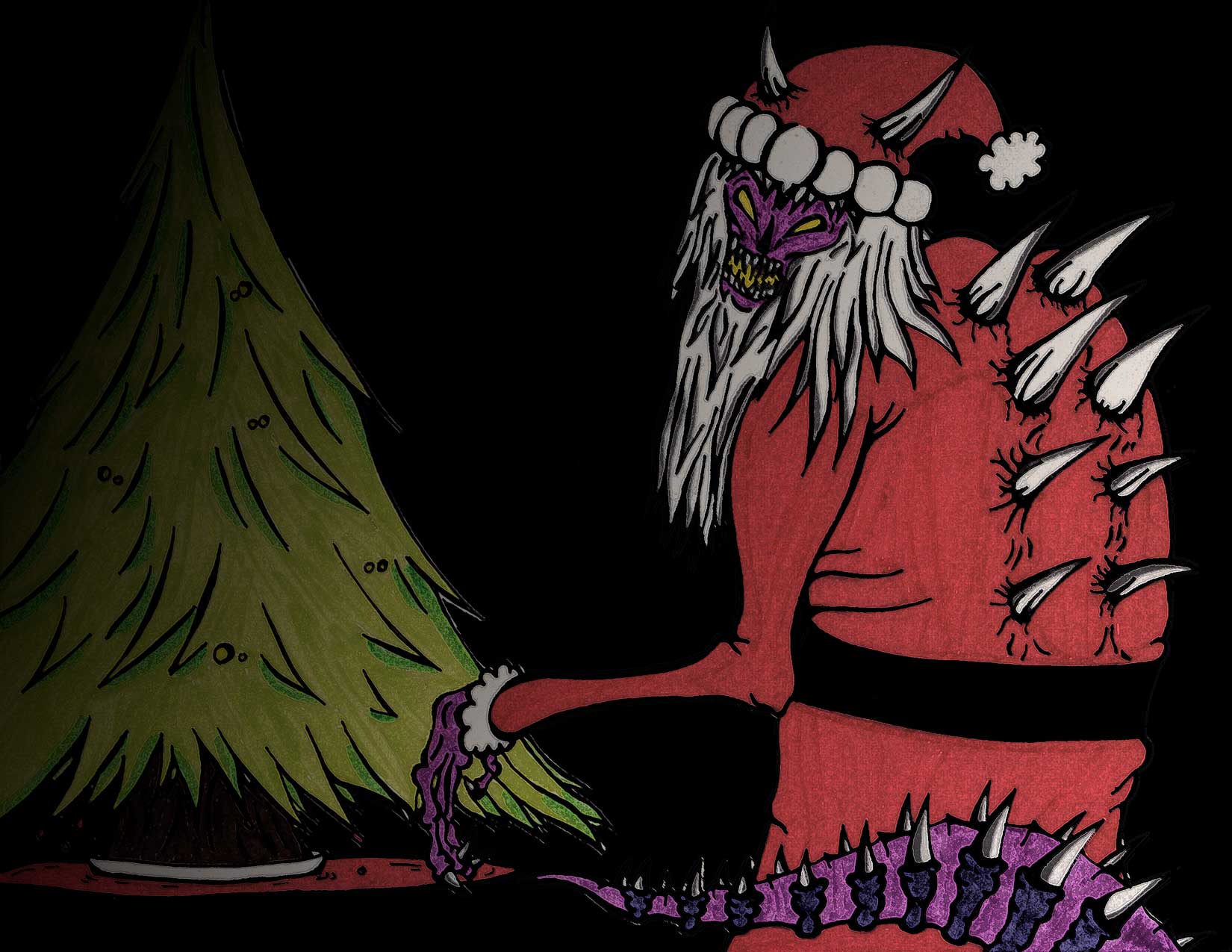 This mythical beast has been a part of yearly festivals and stories for many years in European countries.  Artwork of this mythical character has even been included on candy containers, post cards & greeting cards.

The history on this evil and scary entity dates back to Pre-Christian Alpine traditions and he is referred to as the horned god of the witches & sometimes even a part of initiation rites of certain witch covens.

After the Austrian Civil War in 1934, traditions that included this Christmas time demon were prohibited under the Fatherland’s Front by the Dollfuss regime and by the Christian Social Party.

Today, the celebrations including this “evil Christmas time monster” are regaining popularity and being revived in Bavaria.


krampus - in the movies

One winter on December 22nd, a couple of suburban families get together to celebrate Christmas.  Unfortunately, the Christmas spirit is lost as arguments & tensions grow between various members of the families.  A young boy named Max gets quite enraged and rips his letter to Santa.  He then throws it out his bedroom window and into the wind.

This action starts a series of not so very joyful and Christmas like events.

Return to top of Krampus page

Back to Mythical Creatures A-Z page

Back to MC&B Home Page