Source: First described in 484-425BC in the writings of Greek historian Herodotus


The Phoenix is a sacred mythical fire bird with vibrant plumage and a tail of splendid colors which differ considerably according to various legends.

Though it may have looked fierce, it would never kill or crush a single living thing.

It survived eating only spices and quenching it's thirst with dew.

This magnificent bird had a very lengthy life cycle lasting from 500 to 1000 years long.

Once it's time came to pass, it would build a nest of twigs to lie upon. Then, both nest and bird would ignite and be engulfed in flames burning fiercely and quickly until only a pile of ashes remained. 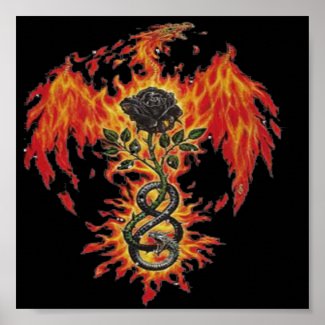 It is from these ashes that a younger bird or egg would appear only to be destined to live as long of a life as its' predecessor.

If one could obtain one, the tear of this magical bird was pure and capable of extreme healing powers.

Its cry was that of the most soothing and captivating song one could ever be graced to hear.